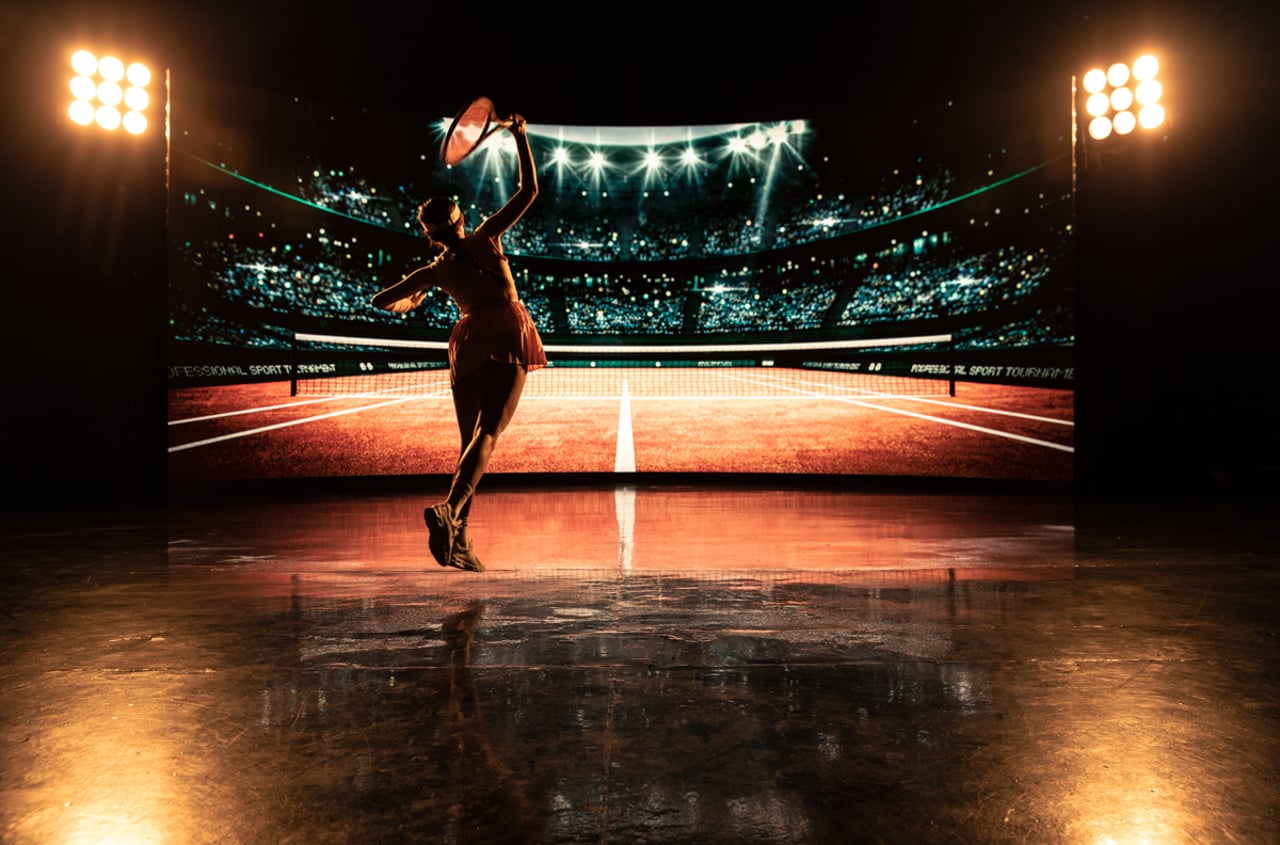 The goal: Brand awareness. The solution: Oh. Oh. Oh. We know just the thing. THE stage.

Tennis is unique in that it is one of few sports that is played on the world's stage with all-stars hailing from around the globe. And Tennis Channel is THE world's stage for the most comprehensive coverage of the sport. It's where hearts are won, hope is lost and fans can revel, reel and rejoice, 24/7.

To stake a bold claim, we needed bold visuals so we went with the best of the best in LA @SVStudiosLA. Using their high resolution state of the art 4K panoramic LED video wall as a versatile backdrop, we were able to create a fully immersive and larger than life experience second to none for our clients.

And if we were going to visually stake a claim, we'd need a brazen script to back it up. ACD and Writer @airwreckakern went poetic with it and began our exploration with none other than Shakespeare himself. The script is grounded in the most infamous line about stages, “All the world's a stage, and all the men and women merely players” from As You Like It to instantly introduce the audience to the overarching campaign concept. But at Tennis Channel, men and women aren't merely players, they are passionate fans. As such, we sought to get to the heart of what it means to be a tennis fan, evoking the emotion that the audience feels for the sport. Matched with visuals of the tennis world's rising stars, we heighten the intensity and create an immersive experience for viewers all while delivering on the brand challenge to communicate the breadth of their tournament coverage,
all day, every day.

Per our patented process, pre production was paramount for this very mathematical concept.

Step one. Locking the edit. Sr. Editor @natehoeft and Erica poured over countless matches, promos, and selects provided by the awesome team at Tennis Channel and began piecing the puzzle together to feature just the right balance of players, moves, and tournament locations, ensuring representation was on point. In addition to Nadal, Federer, Djokovic, Williams, Gauff and Osaka, wake either Nate or Erica up in the middle of the night, bootcamp style, and you may also hear about Medvedev, Tsitsipas, and Fritz. They paired it with a fresh, percussive hype track, discovered by music loving Production Assistant, @julia_berrebi. With the pacing set to establish a competitive attitude, it was time to consider the story arc of the edit itself. Following the course of a match, we start with a face off between two players, the serve, rally and match point that lends itself to the ultimate celebratory build while featuring all of the stars of today's tennis tournament circuit.

Step two. Director @heather_alterego and DP @justin_alterego planned out the foreground action for the three actors chosen to represent the fans to interact with the tournament footage on screen. Timing these actions down to the frame was key and we arrived on tech & screen test day with an animatic and shot list in hand. Thanks to the wonderful @amoodybun for the stellar boards that always help everyone understand what we need to achieve on the day.

And don't even get Justin started on filming live action talent against a 34 foot curved LED wall, “the source footage is 29.97 with some baked in slow motion, we're shooting 23.98 and overcranked 48fps, the refresh rate of the wall is 60hz, as bright as 1200 nits and is a 2.5:1 widescreen ratio (please, actually, get me started ;)”

With some research, collaboration with our good friends and tech team at the stage, and a little trial and success, we sorted out all the frame rate and shutter speeds math and blended frames. We scheduled all off speed shots together and smoothly cruised through our shotlist. More on that in 3…2…

Step three. Create a shoot schedule that allows both video and stills crews to work seamlessly throughout the shoot day. Thankfully, we were able to collaborate with award winning photographer @jason.elias who is consistently as pleasant as he is talented. Splitting his time between our set on the LED wall and a full seamless set up on the cyc we were able to satisfy a wide range of Key Art needs for OOH, Digital and Print.

74 total timed out shots on the day plus a few hundred gigabytes of media from the stills team.

Step four A. Edit and finish. Under two weeks later, we delivered the launch spots to hit around the promotion of Indian Wells Masters only a few days later. It was a full team effort to make it all happen without compromising a thing and we owe it all to steps 1-3. Couple all this with a luscious color palette selected to work with the variety of outfits featured on the screen (who knew hot pink was such a popular choice for tennis) and beautifully accurate performances by our three actors Harley, Charlie and Dekonti. Evening out all the colors in grade and adding subtle sound design to compliment the upbeat percussive track was all that was needed to get this piece ready for the world.

Step four B. Key Art. With thousands of stills taken on set, we were faced with a multitude of riches to deliver on the key art campaign. Partnering with the talented @lvirbickas, we began exploring a variety of approaches to an eye-catching execution that could be tailored for multiple deliverables and tournaments throughout the year. After exploring both heroic and action packed poses we honed in on a court side creative that declares, “We're here to play,” keeping the aspirational and inspirational emotional takeaway of the campaign front of mind.

Many thanks to our client (and now friend) Brian Wild and his amazing team at Tennis for trusting us with their brand and going all in on a concept that communicates the epic nature of this programming. If all the world's a stage, and us merely actors, this was by far one of our favorite performances. Thank you!

At 24, professional tennis player Frances Tiafoe is ranked 31 in the world and hails from Heather's beloved town of Hyattsville, MD. You can find him confidently slapping his bicep in the launch spot above.